I was excited when Jen decided to have her photoshoot in her backyard. My thinking was that it was a good intimate space that has connections to other family memories. It’s a place of meaning.

Her thinking was that it was a familiar place that would keep the kids contained and calm. Well…it turned out to be a high-energy, bouncing around session, but we rolled with it and got a lot of action shots.  Half the time, as I was editing these pictures, I would burst out laughing. Their family’s craziness reminds me of my own.

Jen’s son is so sweet. I love his expression when he hugs his mom.

This whole family is gorgeous.

The confetti shots were tricky because we only had so much confetti and so many chances, and it had to be thrown up high to give us plenty of falling time – this was a task for an adult.

Here are some of our failed tries. 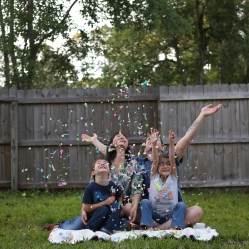 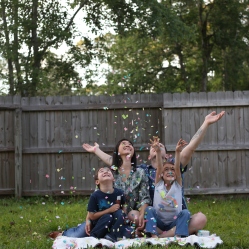 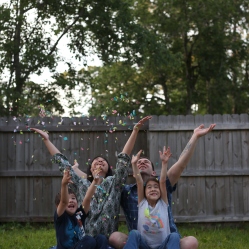 Hands and arms tended to block faces, but after several tries we got it!

After we got the confetti to look good, I helped coach the family’s reactions, because it’s actually not human nature to look up into the sky and let things fall on your face and eyes with glee. But the whole family proved to be such good sports to doing it over and over. 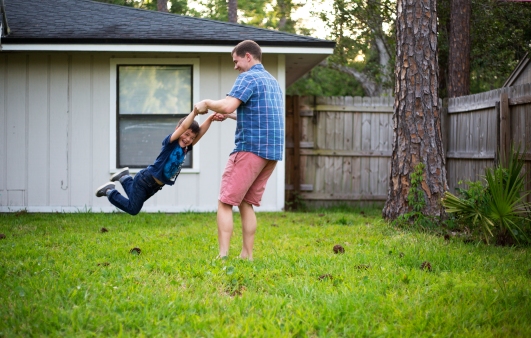 At the end of the photoshoot, this kids wanted to throw confetti themselves, so we had some unscripted play on their trampoline. These candid moments are my favorite of the shoot. In the end, it wasn’t just a fun photoshoot, but a fun memory.

Heather, having lived in Florida for awhile, said to me she wanted the obligatory Florida beach photos – because everybody has them. I laughed, but then set out to make her photos different from everyone else’s.

First, I wanted a cool pier or structure to break up the horizon. Atlantic Beach has a perfect green pier that doesn’t quite reach the water. It is old and faded, but I when I first laid eyes on it, I loved it! 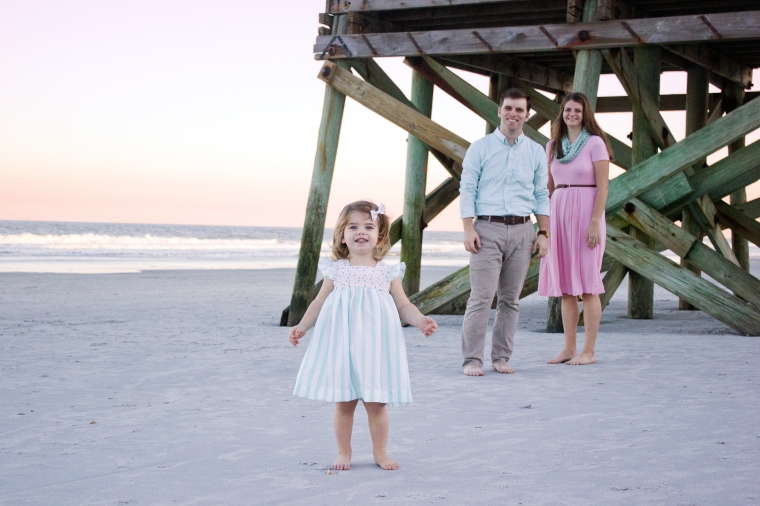 This picture is my favorite. The way their little girl is twisting out of their arms, Heather’s hair is whipping in front of her face, and Greg is looking up for just a split-second – it’s just a moment full of motion and spontaneity. You wouldn’t have even guessed their daughter was squirming and screaming because I was threatening to tickle her. I think she’s looking at my tickling left hand while my right hand is struggling to balance the camera.

As the sun went down, we witnessed amazing colors in the sky.

I love their daughter’s one eye poking out.

Second, we took a step back from taking pictures and did some free-form candids – which is risky because it’s just me dashing around trying to get a good angle of while them play. I’m gave them little direction, and didn’t know how it would turn out. But the ocean is too great a temptation to ask anyone, let alone a toddler, to sit still for long. So I relaxed a little and followed them as they played. We ended up collecting a lot of seashells, but it made the moments feel fresh and alive! 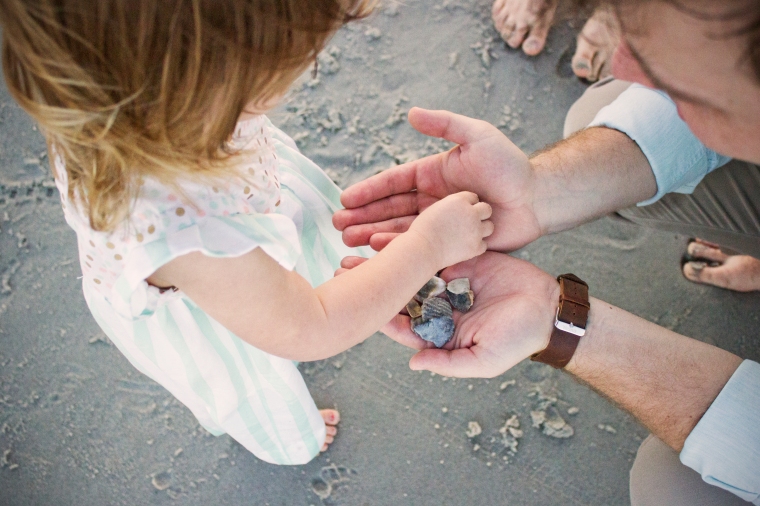 3. I like to bring props to mix things up. At the end of the photo session, I pulled out a surprise! I feel with little kids, you can’t ask them to act or pretend – their feelings of joy or surprise must be real. So I bought some yellow balloons and because I’m a dork, I hid them in a large black garbage bag and hauled that on the beach.

When their little girl saw the balloons, it was like she had a sugar spike.

She’s not letting anyone touch the balloons.

At the end of day, when the light was almost gone, I told them to let go of the balloons and watch them fly away. Their daughter was very concerned. The balloons flew higher and higher…gone. Afterward, she kept on saying, “Balloons, go home.” It was so cute. This was the last shot of the day. I asked Heather and Greg to kiss their daughter on the cheek, but she was still so concerned about the balloons that she didn’t want to be bothered with a kiss. This is why compositing photos is such an important part of what I do. If any moment is missed, I can merge the best part of two photos.

Unedited. Parents are spot on, child is not having it.

Unedited. Child’s face is spot on, mom is pushed away.

Final edited image. It has the best of expression from both pictures.

In the end, I’m glad we took the obligatory beach pictures. But by finding a great structure, taking part in free-form candids, and having a surprise prop, these pictures become so much more!